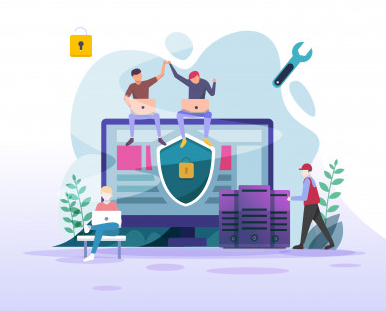 A Virtual Private Network (VPN) is a connection method that lets you browse the web safely and privately by masking your location and identity. Encryption is fundamental to achieving this objective.

VPN encryption does not only protect your valuable personal data, but keeps you safe from snooping eyes online. It ensures that unauthorized parties cannot gain access to data that is transferred between the user’s network and the VPN’s servers. In fact, VPN and encryption have become synonymous with each other, due to the nature of their relationship.

This article discusses encryption in detail: what it is, how it works, and how VPN services can use it to ensure users are protected at all times. It is my goal to help you have a better understanding of this complex subject, and make more informed decisions when choosing a VPN provider.

In the simplest terms, encryption is a lock. With the right key, the lock can be opened easily. If one does not have the correct key but wants to access the contents (your valuable data) protected by that lock, then they can attempt to break the lock. And just as a bank vault’s lock system is a lot stronger than a suitcase lock, not all encryptions have the same strength.

Do you remember playing the game in which you used a “secret message” to send notes while in grade school? What you were effectively doing, in cryptography jargon, was to “encrypt” the message (data) according to a simple math algorithm; for instance, A = 1, B = 2, C = 3. Today’s encryption technology is similar, but is much tougher than the simple mathematics algorithm we played with while we were kids.

In modern encryption technology, a secret cipher is used to “scramble” data to make it unreadable by anyone who does not have the cipher key. Anyone who wishes to decode ciphertext needs to have a secret key. This means that encrypted data is always protected against the prying eyes of outsiders.

Banks, merchants, credit card processors, as well as some of the biggest organizations in the world use encryption technology to protect sensitive data from the snooping eyes of outsiders. However, for the sake of this article, we will focus on how VPN services use encryption to protect users’ information – such as their downloads, web traffic and overall online activity – from those who try to get a peek into their personal affairs.

A VPN protects your data by routing your internet connection through an encryption “tunnel”. This prevents any outsiders such as hackers, law enforcement agents or even your Internet Service Provider from monitoring your IP address and online activity. The encryption tunnel is aptly named, as it works like a highway tunnel or subway.

For instance, while you are aware that there is a subway beneath your feet, you do not see the trains passing through its tunnel, the passengers riding in them, or their destination. A VPN is like a virtual “tunnel” that protects all you online “journeys”, ensuring outsiders do not have any idea about what you are up to. 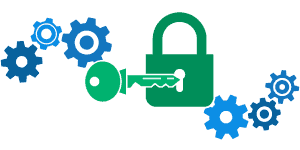 VPN encryption is based on sophisticated math algorithms that encode all data or information via a code, known as ciphertext.

Encryption keys in use today are of two main types: symmetric and asymmetric.

A symmetrical encryption is one that uses the same encryption key for both the encryption of plaintext data as well as the decryption of its ciphertext. This type of encryption is usually faster than the asymmetric type, as only one key is involved. However, the downside here is that once any outsider obtains the key, all the encrypted information can be easily decrypted.

It is very possible for snooping eyes to gain access to symmetrically encrypted data, as the two parties sharing the information will need to agree on a specific key through a text message, phone call or email – all of which are unencrypted and unsecure.

Decryption of any data encrypted using a private key can only be possible when a corresponding private key is used. This makes asymmetric encryption more secure than symmetric type, both parties do not need to share a single key. However, due to the more complex nature of asymmetric cryptography, the encryption and decryption usually takes longer than symmetric cryptography, and this slows down the transmission slightly.

There are different methods and techniques used to encrypt data, and they vary in strength and security. The VPN end to end encryption (E2EE) is a common method used for the transfer of information where the data needs to be decrypted at the end of the connection, that is the VPN server in this case. However, the drawback with VPN end to end encryption is that the information can still be intercepted by hackers at the source, that is the user’s device, before it is encrypted and transferred.

Another technique is link encryption. This method is slightly different from end to end encryption as it ensures information at every point in the communication channel is encrypted and decrypted. Two main types of link encryption are Secure Sockets Layer (SSL) and Transport Layer Security (TLS).

When searching for the best VPN service, you should look out for one which uses the AES-256 encryption method as it provides the strongest form of security. 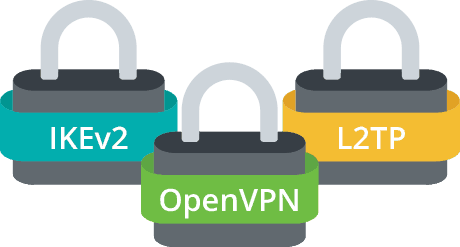 A VPN protocol is a “set of instructions” or a mechanism that defines the nature of an encrypted connection between two devices, i.e. the user’s computer and the VPN’s servers. A VPN protocol uses an encryption algorithm to protect your data against snooping eyes. When connected to a VPN network, a device follows the protocol’s set of instructions, which defines how the data that is sent and received between the device and the VPN server should be encrypted and decrypted.

PPTP (Point-to-Point Tunneling Protocol) is one of the oldest VPN protocols still in use, as it has been around since Windows 95. It creates a tunnel using a Point-to-Point Protocol (PPP encryption VPN) to encrypt data which is transferred through it. PTPP is used by some of the best VPN services as a result of its fast speed and simplicity.

L2TP (Layer 2 Tunneling Protocol) is generally used in combination with IPsec (Internet Protocol Security)to create an ultra secure VPN connection. The L2TP creates the connection points while the IPsec does the encryption of data communicated between devices and the VPN servers.

The SSTP protocol is similar to the above protocols in terms of its functioning, except that its security technology is the SSL (Secure Sockets Layer) rather than PPTP or IPsec. It is the proprietary protocol standard of Microsoft, and is available for Linux, Windows, MacOS and BSD devices. SSTP is incredibly secure, but many VPN providers do not support it.

OpenVPN is the most popular VPN protocol in today’s VPN space. It is supported by some of the best VPN services. OpenVPN uses OpenSSL encryption type to secure all information transferred through its channels. It uses 256-bit encryption method, making it one of the most secure VPN protocols.

VPN data encryption essentially makes your web traffic and data surveillance-proof, protecting it from the prying eyes government agencies, ISPs, and cybercriminals. Hopefully you now have a better understanding about how encryption works, and how VPN services use it to protect your online travels. As you’ve read, some encryption techniques have their strengths and weaknesses, but they all offer some reasonable level of protection.

When searching for a VPN provider, ensure you choose one that offers OpenVPN as a VPN protocol option as it provides the best protection for your personal and business activities on the internet.