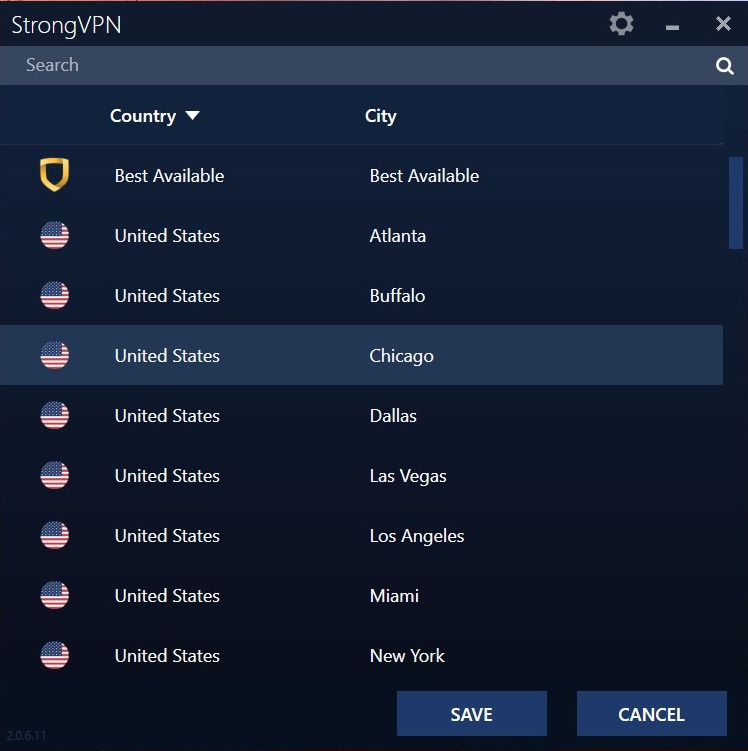 StrongVPN is one of the oldest VPN services in the world – they have been in the VPN business twice as long as many top tier VPN providers. But is this enough to convince a potential user?

It wouldn’t be out of place to think that they should be twice as good as their competitors since they have been practicing and optimizing their VPN service for so long, right?

Well, as you will soon find out, this is not always the case.

This is why we tested StrongVPN rigorously to provide answers to common questions such as:

This VPN review answers all of these questions, and much more. But first, let us take a look at some of StrongVPN’s pros and cons.

Starting from StrongVPN’s speeds, let us take an in-depth look into the details that make up the VPN service.

Before we provide answers to these questions, let us consider some StrongVPN pros and cons:

StrongVPN has very impressive speeds, which is reliable for HD streaming, whether it is same-country connections or more distant ones.

Before connecting to StrongVPN:

When connected to StrongVPN:

Before connecting to StrongVPN:

When connected to StrongVPN:

We observed a 10% speed loss when connected to StrongVPN. However, the latency was on the high side, at 16ms for same-country connections. Gamers may want to consider other VPN services since some register ping times of less than 1ms.

The upload speeds when connected to StrongVPN is very impressive too, making it a great choice for torrenters.

StrongVPN’s server network is limited, with around 650 servers covering 26 countries. We prefer VPN services with wider coverage – at least 50 countries or more. Unfortunately, StrongVPN does not even cover countries like New Zealand, Argentina, Indonesia, and Greece.

But there’s still a big plus for StrongVPN users: StrongVPN makes nearly 60,000 IP addresses available to its users – a very high number which helps to maintain its excellent and reliable speeds.

Good Choice for Users in China

StrongVPN is a decent option for users in China as it is able to bypass the aggressive online blocks in countries with high censorship like China, UAE, Turkey and Iran. The VPN’s obfuscation technology not only bypasses the censorship, but scrambles your VPN connection, making it difficult for your identity to be uncovered.

Take note that StrongVPN is blocked in China, so you’d have to download the software and set it up before you travel. This should also apply to other countries with high censorship.

StrongVPN only became compatible with US Netflix recently. Though the VPN service does not have any servers optimized for streaming, which obviously makes it more difficult for streaming fans, you shouldn’t experience too much trouble finding a compatible server.

Streaming BBC iPlayer is even more frustrating. StrongVPN works well with BBC iPlayer on some days, and can be very unreliable on other days. You may want to look elsewhere if you streaming iPlayer is important to you.

StrongVPN allows torrenting and P2P activity on all of its servers. During our recent tests, the upload and download speeds were good, and StrongVPN’s strict logging policy means that your online business cannot be traced. Other StrongVPN features that make it a great choice for torrenting include VPN kill switch and protection against IP, DNS, or WebRTC leaks.

StrongVPN has a strong no-logs policy – the VPN provider does not log any data whatsoever, even for the running of its service. This includes basic metadata like amount of bandwidth consumed, chosen server, and timestamps.

Since StrongVPN does not collect any user data, it is practically impossible for your online activity to be traced back to you.

StrongVPN was founded by Strong Technology, LLC in 2005, but has changed hands a few times since then. It is now owned and managed by J2 Global. Though J2 Global is a US-based company, and StrongVPN promises to cooperate with legal subpoena requests, the company states that it cannot provide information that it does not have. This is because StrongVPN does not collect any user data, so authorities cannot personally identify users through their online activities.

Though StrongVPN is not the most secure VPN service we have tested, as the OpenVPN is not available on all of its servers. Most StrongVPN servers use the old-fashioned and more vulnerable PPTP protocol. However, it is still safe enough even for the privacy-minded person.

StrongVPN has security features such as a VPN kill switch which protects your true IP address from prying eyes, it also uses AES-256 encryption method, and operates all servers in its network, so your web traffic is protected from third-party eyes.

Simple and Easy to Use for all Devices

StrongVPN’s custom apps were recently updated to make them handier for inexperienced VPN users. The main screen only displays the important connection details, while there are a few basic settings behind the cog icon at the top of the app.

The mobile apps are also user-friendly, with a big button taking center stage on the screen. However, the mobile apps lack certain security features, such as a VPN kill switch.

Compatible with Major Devices and Routers

StrongVPN provides native apps for popular devices, including iPhone, Mac, PC, and Android. The StrongVPN website also has a set of manual guides for other operating systems and devices like Kodi, Amazon Kindle, and Linux.

StrongVPN also lists step-by-step instructions on how you can manually configure your router to protect the web traffic of all your home’s devices.The simultaneous connection limit of 12 devices is one of the highest we’ve seen.

You can use StrongVPN with streaming devices and game consoles by either configuring it manually using the instructions or installing the VPN on your home router. The VPN service also has a custom app for Amazon Fire TV, though it is not as good as some of the Firestick VPN apps out there.

StrongVPN has a live chat support feature, but it is very average at best. Most times, the support agents just copied and pasted answers from the FAQ section.

But they always sent our details to their tech team whenever they were unable to address our problems, and this proved to be very helpful. There are a number of setup manuals for a range of devices on the StrongVPN website. But if you are experiencing minor issues, the FAQ section should do a good job.

StrongVPN’s standard monthly plan costs $10, but it becomes a lot cheaper with longer subscriptions. The annual plan is available at $5.83 per month, saving you a sizable 42%.

StrongVPN offers a 30-day money-back guarantee, but there is no free trial. According to the StrongVPN website, this refund policy is for subscribers who are “less than 100% satisfied with the StrongVPN service”. The good news is there are no data caps or hidden restrictions.

StrongVPN accepts a wide range of payment options, including PayPal, Alipay, and most credit and debit cards. However, we were a little disappointed as there is no option to make payments through cryptocurrencies.