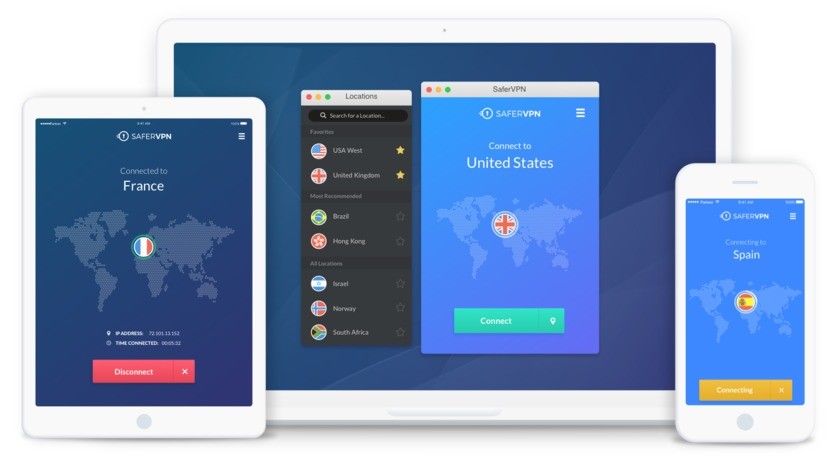 SaferVPN boldly prides itself as the “fastest and simplest VPN” out there. Established in 2013, the VPN service set out to provide “private, secure and unrestricted internet access”, but does it live up to this billing? Can SaferVPN really be as fast, simple and secure as it claims?

This VPN review breaks the SaferVPN service down in great detail in order to find answers to that – as well as the following questions:

SaferVPN is a pocket-friendly VPN service, and the company has done some impressive work by introducing its Unblock the Web initiative in order to ensure increased freedom on the internet. But is the VPN service really as good as it claims? Starting from SaferVPN’s speed test, this extensive VPN review tells us the full story.

Before we provide answers to these questions, let us consider some SaferVPN pros and cons:

SaferVPN is just good enough for the casual internet user looking to stream in HD and surf the web. Connection speeds drop by around 18% on same-country VPN connections, which is fair enough for a VPN.

During our tests, SaferVPN gave us speeds of about 76Mbps, which allowed us download large files quickly and stream buffer-free content.

Before connecting to SaferVPN:

When connected to SaferVPN:

Before connecting to SaferVPN:

When connected to SaferVPN:

We observed an 18% download speed loss when connected to SaferVPN. International connections are far less speedy, with VPN connection from the UK to the US dropping by 76%.

Coverage Spreads Across the Most Popular Destinations

SaferVPN’s server network is very small, with 700 individual servers (all virtual) covering only 34 countries. These countries include popular locations like the UK, the US, Canada, Australia, and other prominent destinations in Western Europe.

SaferVPN has a handful of server options in Asia, Africa, and South America, with notable destinations including South Africa, Hong Kong, Brazil, Mexico, Thailand, and Japan. There are no city-level servers, but SaferVPN has servers covering the East and West in the US, which is still fair enough (though this wouldn’t be useful if you want to connect to a specific state).

Since SaferVPN operates virtual servers only, it means that all of its servers are from third-party providers. Although they encrypt user traffic on these servers, VPN providers that own physical servers are more preferable since they have absolute control of the servers, and can ensure maximum privacy and security of users.

There are only 1,000 IP addresses in the SaferVPN network, so you may experience slow speeds and server congestion at peak times.

Since the crackdown on VPNs by the Chinese authorities, SaferVPN’s connectivityhas become increasingly unreliable. Even the native VPN apps are blocked, but you may be able to bypass the censorship by manually configuring SaferVPN with the OpenVPN protocol. It is a complex and lengthy process, and there’s no guarantee that it’ll work.

SaferVPN lacks the obfuscation technology needed to evade the aggressive blocks of China’s Great Firewall. However, SaferVPN still remains a fairly good choice in other high censorship countries due to its strong privacy tools, Asia-Pacific servers, and access to Tor over VPN.

SaferVPN has strong security and encryption features designed to keep users safe online. OpenVPN offers the best balance between privacy and performance. AES-256 encryption is considered impenetrable. The VPN kill switch ensures user ID is not exposed in the event that there is a connection drop.

However, we were disappointed to discover that SaferVPN does not manage its own DNS servers, though it uses Google Public DNS, which provides a high level of security and performance.

SaferVPN has recently updated its app to offer protection against DNS and IPv6 leaks, helping to prevent ISPs from getting access to DNS requests.

SaferVPN has dedicated servers for UK and US streaming services. Unblocking Netflix is pretty easy through SaferVPN’s US server, though we experienced connection issues intermittently. This is about the same case with BBC iPlayer, which we were able to access during our tests by connecting to SaferVPN’s dedicated UK streaming server.

Unfortunately, SaferVPN’s UK server does not work with the UK Netflix library. It does not also allow access to Amazon Prime Video.

SaferVPN claims to unblock services such as ESPN, Sling TV, Hulu, HBO, and Sky, but the support team advices potential users to sign up for a free trial to test out the VPN service before you subscribe.

SaferVPN’s upload speeds are quick when connected to a nearby server, but it only allows torrenting and P2P activity on three server locations (Canada, Spain, and the Netherlands). This limited number of P2P-compatible servers may also lead to slow speeds and server congestion at busier times.SaferVPN also works with Kodi, and if you’d like to use it on your Amazon Fire TV Stick, you would have to install SaferVPN on your router.

Stores Some User Data and Based in the US

SaferVPN operates a minimal logging policy. Though they do not collect user IP address, data, or browsing activity, it is still possible that they reduce the data they log without compromising on performance. This is because each time a user activates the SaferVPN service, it logs the following information:

These logs are stored for 90 days in the SaferVPN system – which is longer than we are comfortable with. However, we also know that it would be pretty difficult to trace an individual using this data.

SaferVPN was launched in 2013, and was recently acquired by NetProtect – a US based company. As a member of the Five Eyes intelligence-sharing alliance, the US has strict data retention laws. However, the good news for SaferVPN users is that the company states that they wouldn’t hand over the stored data to a business, government, or any other type of organization for any reason.

Apps are Incredibly Easy to Setup and Use

SaferVPN’s native apps are very easy to install and pleasant to use. The configurable settings are well organized into tabs to make it easy for beginners and advanced users to navigate. However, essential features like VPN kill switch are unavailable in SaferVPN’s mobile apps.

SaferVPN’s native apps are very easy to install and pleasant to use. The configurable settings are well organized into tabs to make it easy for beginners and advanced users to navigate. However, essential features like VPN kill switch are unavailable in SaferVPN’s mobile apps.

SaferVPN offers 24/7 live chat support, but chatting with the agents at the other end can feel frustrating at times. Though the responses are very quick, the agents struggled to provide answers to some basic questions. The online knowledge base may prove helpful in this regard, but you may find real support had to come by if you experience more technical issues.

SaferVPN offers a ‘no questions asked’ 30-day money-back guarantee, with no data caps or restrictions. The VPN service processes all refunds within ten working days, limiting the risk to a user.

There is also a 24-hour free trial option, which gives users full access to the SaferVPN service. The VPN provider only requests your email address, so if you’d like to test out this VPN service before committing to a plan, this is a great way to do so.