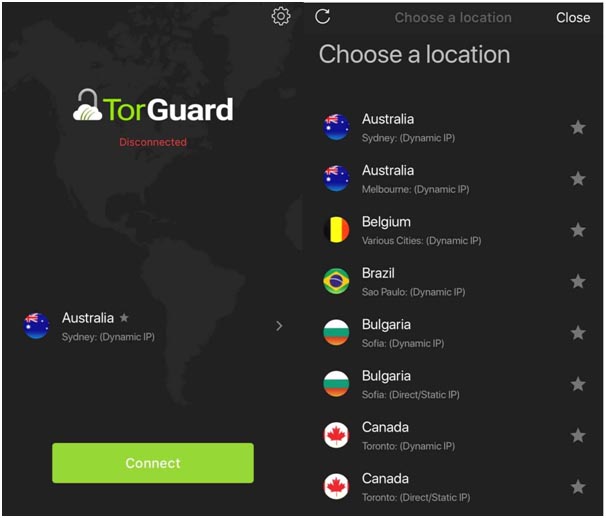 TorGuard is a popular VPN service that was founded in 2012, but has its relatively long stay in the industry made it one of the best VPN services?

Among TorGuard’s many offerings, the VPN provider promises its users “complete privacy”. This is one reason we were especially excited about putting TorGuard through extensive and rigorous tests.

This VPN review provides answers to questions such as:

Before covering these questions, here’s a quick look at some of TorGuard’s main pros and cons:

Before we provide answers to these questions, let us consider some TorGuard pros and cons:

TorGuard’s speeds on local connections have remained impressive, though its international performance has taken a hit. TorGuard will be a good choice if you are just looking for a VPN service that would allow you surf the web and stream online, but you may want to consider other VPN services with super-fast overall speeds if you’ve got some more complex stuff to do online.

Before connecting to TorGuard:

When connected to TorGuard:

Before connecting to TorGuard:

When connected to TorGuard:

We observed a download speed loss of 6% when connected to TorGuard.

TorGuard’s fast upload speeds and decent same-country ping times of 9ms make it a great choice for gamers and torrenters.

Over 3,000 Servers Spread Across 51 Countries

TorGuard’s server network covers 51 countries, which means that you shouldn’t experience any trouble finding a nearby server no matter where you are in the world.

TorGuard does not state the exact number of IP addresses it maintains, but its over 3,000 servers suggest that it is unlikely that users would experience slow speeds and server congestion.

TorGuard offers city-level options in ten US cities – Chicago, Dallas, San Francisco, Los Angeles, Las Vegas, Seattle, New York, New Jersey, Atlanta, and Miami. City-level choices are also available in a few other countries such as Canada, Singapore, Hong Kong, Israel, and India, with two different cities in each country. We were pretty disappointed to discover that TorGuard does not offer city-level options in the UK, though.

TorGuard is a good choice for users in China, despite the government’s crackdown on VPN services. TorGuard’s Stealth VPN protocol, STunnel, is effective in evading China’s Great Firewall.

STunnel can be activated by simply ticking a box in the VPN’s app. This protocol adds an extra layer of encryption to your VPN connection.

TorGuard user reports suggest that the VPN also works well if you connect to its US, Japan, Taiwan, Singapore, or Hong Kong servers. Keep in mind that the TorGuard website is currently blocked in China, so you must download the VPN before your trip to the country.

TorGuard has also proven to be reliable in other countries with high censorship such as Turkey, Saudi Arabia, and Iran.

TorGuard is an incredibly secure VPN service which uses some of the most secure features – OpenVPN, the strongest VPN protocol, and AES-256, the highest level of encryption.

TorGuard also operates its own DNS servers and has a VPN kill switch, designed to protect user information. Other TorGuard advanced settings include custom proxy servers, app kill (to terminate listed apps in the event of a connection drop), and dedicated IP addresses.

Before now, we used to be able to unblock Netflix using TorGuard, but this is no longer the case.BBC iPlayer also remains blocked on all of TorGuard’s servers, which is frustrating for streaming fans.

TorGuard is a great choice for torrenting, as it permits P2P activity on all of its servers. A combination of fast upload speeds, a transparent zero-logs policy, and a VPN kill switch make it an excellent VPN service for torrenting.

TorGuard does not store any user logs, not even temporarily keeping log connection metadata which many VPN services use for the running of their network. this means that nothing about your online activity via TorGuard can be traced back to you.

TorGuard is a US-based VPN service owned by VPNetworks LLC. Beyond its name, nothing else is known about this company, which is a plus for a VPN provider, but we’d always prefer a more transparent online presence for any VPN service.

The United States isn’t an ideal location for a VPN service, but TorGuard’s zero-logs policy means that there is nothing to worry about. TorGuard would have nothing to hand over if law enforcement agents were to request your personal information.

The TorGuard apps use the OpenVPN protocol, and users can manually select TCP or UDP if they so please. There are loads of advanced settings – well organized to enable you add improved security layers, execute custom scripts, or switch to TorGuard’s proxy servers.

TorGuard is easy to use – once you download and install the app from the website, sign up for an account, then visit the downloads section to select the device you wish to use TorGuard on.

Cannot Be Installed on all Major Platforms

TorGuard has native apps for Microsoft Windows, iOS, MacOS, Linux, and Android devices. TorGuard can also be installed on your router, or you can buy a pre-configured router from the TorGuard website.

TorGuard works well with a range of streaming devices and game consoles. All you need do is connect them to a router running on TorGuard’s software. There is also a native app for Amazon Fire TV and Stick, which you can easily download and install in your device.

TorGuard’s customer service is pretty impressive for a budget VPN provider. The website has loads of valuable information, but navigating it can be a bit difficult, plus TorGuard makes no effort to clearly breakdown complex concepts. You could use the forums to find useful answers for your questions, though.

TorGuard also has a live chat service, though it isn’t available 24/7. The live chat support agents use generic responses, but they are generally friendly, and there is also a quick-response email support if that would suit you.

TorGuard’s standard monthly plan costs $9.99, which is fair enough compared to other VPN services. But you can make bigger savings on longer plans – the six and 12-month plans save you 50% at $4.99 per month.

TorGuard offers a ‘no questions asked’ seven-day money-back guarantee, in place of a free trial. TorGuard says users will be refunded if they are “less than 100% satisfied” with the service, and refund requests will be processed within 3-4 days.

TorGuard accepts a wide range of payment options, including PayPal, a significant number of cryptocurrencies, and all major credit and debit cards. The VPN service, through its partnership with Paymentwall, also accepts Neosurf and Alipay.