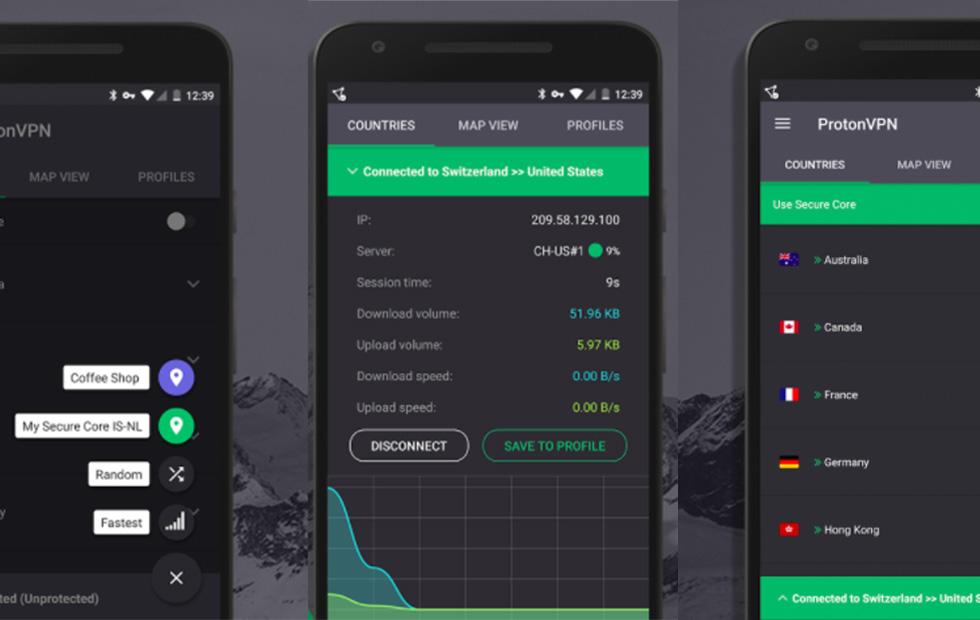 ProtonVPN is a Swiss-based VPN provider that prioritizes the safety and privacy of its users. It is no wonder the VPN service has been linked with the brains behind ProtonMail, the largest encrypted email network in the world.

The ProtonVPN website features a number of unique security offerings, as well as comprehensively priced plans to match its service. Surely this VPN would be a great choice for you, right?

This is what we are here to find out. Over the past few months, we have conducted comprehensive tests on ProtonVPN, in order to provide answers to questions such as:

In terms of security and user privacy, ProtonVPN is up there with the very best VPN services in the market. But it is far from a perfect VPN. Read on as this VPN review discusses what we like about ProtonVPN and what could do with some improvement.

Before we provide answers to these questions, let us consider some ProtonVPN pros and cons:

ProtonVPN delivers above average download and upload speeds when connected to nearby same-country VPN servers. This makes it ideal for privacy-conscious users as well as streaming and torrenting fans.

During our tests, we experienced only a 3% connection drop when connected to a London server.

Before connecting to ProtonVPN:

When connected to ProtonVPN:

Before connecting to ProtonVPN:

When connected to ProtonVPN:

We observed that ProtonVPN’s performance drops when connected to international servers, with about 45% drop when connected to the US East Coast VPN server. However, your VPN speed still largely depends on the speed of your internet network. The latency on ProtonVPN’s servers is relatively high. If you are a gamer, you may consider other better options available. We observed that the pace of the upload speeds do not quite match the downloads, but there is only 18% speed drop on nearby servers in France and the Netherlands, so ProtonVPN wouldn’t disappoint you.

ProtonVPN has a small server network in terms of its coverage, with only 33 countries available. ProtonVPN’s server network spreads across North America and Western Europe well – popular locations such as the UK, the US, Australia and Canada are well covered, as well as some countries in each of the other continents.

South Africa and Brazil are the only countries covered in Africa and South America respectively, while users in Asia can enjoy ProtonVPN’s service in Israel, South Korea, India, Hong Kong, Japan, and Singapore.You may want to consider other VPN services if you need server coverage in more distant locations. NordVPN is one of the best VPN services in this regard, as it covers over 60 countries.

34 of ProtonVPN’s 450 servers form a part of the ‘Secure Core’ of the VPN’s network. The Secure Core servers are designed to bounce your traffic through a remote location (like Sweden or Iceland) before it is relayed to your preferred destination. ProtonVPN’s Secure Core network is similar to the DoubleVPN or Doublehop in some top tier VPN services – it makes your activity much harder to trace, though this feature causes a little connection drop. Another big plus for users is that all of these optimized servers are exclusively owned and managed by ProtonVPN.

Not Ideal for China

Despite its Secure Core server network dedicated for use with Tor, ProtonVPN is not a good choice for countries with high censorship like China, Russia and Turkey. Many users have experienced difficulties connecting with ProtonVPN, making it an unreliable choice for this purpose.

If you need a VPN service that can allow you connect high censorship countries, you may want to consider using any of the best VPN services in our guide.

Some of ProtonVPN’s features include:

ProtonVPN is a great choice for privacy-conscious users.OpenVPN, the most secure VPN protocol, is used exclusively on ProtonVPN’s desktop app, which assures users that their web traffic will be protected at all times. ProtonVPN’s mobile apps use IKEv2, which is also a secure protocol. The ultra-secure AES-256 encryption, which is also used to protect ProtonVPN users, is considered unbreakable.

We were disappointed that users do not have options to choose their preferred protocol, but given that OpenVPN is our VPN protocol of choice, ProtonVPN is just fine in this regard.

The VPN kill switch is another amazing and very essential feature in ProtonVPN, as it protects your IP address against leaks in the event of the connection drop. The same applies for protection against IPV6 and DNS leaks, which we confirmed with our independent leak tests.

Great Choice for Netflix and Torrenting

If you’re looking for a quick and hassle-free way to unlock Netflix, then ProtonVPN is an ideal choice. On the ProtonVPN website you’d find a handy article that tells you which VPN servers are currently compatible with Netflix and Hulu. If you are on the VPN’s free or basic plan, you will need to upgrade your subscription in order to watch Hulu and Netflix.

Unfortunately, ProtonVPN does not officially support many other streaming services, including BBC iPlayer and Amazon prime Video. This is as a result of the heavy crackdowns on VPN services, but if BBC iPlayer is so important, there are still other VPN providers that are compatible with the streaming service.

ProtonVPN’s consistent download and upload speeds make it a great choice for torrenting, but only four VPN server locations – Singapore, Sweden, Switzerland, and Netherlands – allow P2P activity. Servers that are compatible with P2P activity are marked with an icon with two arrows. But torrenting is even more restricted for Basic plan users, while it is not allowed at all on the free plan.

Nonetheless, you can rest assured ProtonVPN is an incredibly secure VPN service that will keep you safe while you torrent, and its kill switch will ensure your identity is protected at all times, even when there is a connection drop.

ProtonVPN does not log any data that personally identifies its users or their online activities. It only logs a timestamp of your most recent successful login. This information is stored only to ensure that no one else accesses your account, and is overwritten each time you login. But most importantly, the stored data cannot be used to trace you or your activity since ProtonVPN does not log IP addresses and websites you visit when connected.

ProtonVPN comes from a reputable company in the cybersecurity industry. This means that its users can benefit from the protection of one of the strongest privacy laws in the world, outside of the data retention laws in the EU as well as the 14 Eyes data surveillance alliance.

Truth is, when compelled to release the “limited data” in their possession by Swiss authorities, ProtonVPN will disclose this information. But the fact that you cannot be identified with the data means that it isn’t a problem you should worry about.

ProtonVPN is super simple to set up as the whole process only lasts a few minutes. Once you have signed up and chosen your preferred subscription, simply log in to your account and download the software compatible with your device. Follow the clearly written prompts as you install the software, then log into the ProtonVPN app.

The ProtonVPN desktop app is also user-friendly and well detailed. On the main screen you will find a lot of valuable information, including its download and upload speeds, server load stats, and your new IP address. The locations on the app are listed alphabetically, making it easy for users to navigate. Dedicated P2P and torrenting servers are clearly labeled, as are those compatible with Tor.

The ProtonVPN Android app version is still easy to set up and use, but it still lacks certain important features when compared with the desktop version.

ProtonVPN has custom apps for only Android, Apple MacOS, Microsoft Windows and iOS devices. The VPN can also be installed on Linux but you would first have to download the third-party OpenVPN software, which could be pretty complex for newbie VPN users.

If you are subscribed to the ProtonVPN Basic plan, you can use up to three devices simultaneously, while the Plus plan allows up to five devices and up to 10 devices for the Visionary plan.

ProtonVPN does not have custom apps specific for streaming services like Amazon Fire TV Stick, as well as game consoles like PlayStation or Xbox. But you can use ProtonVPN to protect game consoles and streaming devices, though. The easiest way to go out this is to configure your router manually with ProtonVPN. Just check the support pages on the ProtonVPN website to ensure your router is compatible.

ProtonVPN has online resources and provides email support for its users, but this service is basic at best. The online support center has a number of FAQs that cover general topics, as well as a search feature for users to look up specific keywords.

The VPN’s website also has a series of troubleshooting tips and detailed set-up guides for devices that have to be manually configured. But if you are not satisfied with the response from the support pages, you can send ProtonVPN an email as there is no live chat feature. Unfortunately, the email responses are really slow, so ProtonVPN has some work to do if it is to compete with some of the best VPN services in the marketplace.

ProtonVPN has different plans tailored to meet the unique needs of its users, with each plan allowing users a monthly or yearly payment option.

The Basic plan costs $4 per month if you subscribe for a year, but this subscription limits you to only two connections at the same time.

The Plus plan costs $8 per month if you subscribe for a year, and is equipped with ProtonVPN’s ‘Secure Core’ servers. This plan also unlocks Netflix.

The Visionary plan – the most expensive plan we have seen from any VPN service – costs $24 per month, but it is packed with everything available in other packages as well as 10 simultaneous connections and access to ProtonMail Visionary, which costs $30 on its own.

ProtonVPN’s payment options include PayPal, credit/debit card, and Bitcoin or cash to ensure privacy. Those based outside Europe or America can make payments through international options like Alipay.

ProtonVPN offers subscribers a 30-day money-back guarantee, and this is not subject to any data usage caps. Just request a refund by sending an email to the support team and you will receive your money back within 30 days. You can try out the free plan if you want to be sure about ProtonVPN’s service quality before you commit to a paid plan.