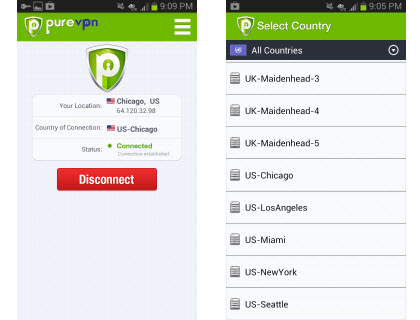 PureVPN is one of the oldest and largest VPN services on the market. Founded in 2006 as an experiment, PureVPN only started offering VPN services the following year. The VPN service is the brainchild of a Hong Kong company called GZ Systems. Today, PureVPN is widely known for its impressive range of server locations which gives users secure internet access from different parts of the world.

What’s more, on its homepage, PureVPN claims to be “the world’s fastest VPN service”. Truth is, the VPN looks like the real deal at face value, even to some of the most experienced VPN users. But we always want to be sure of the VPN services we review, which is why we conducted thorough tests on PureVPN to determine if its claims are mere marketing pitches or they are really true.

During our VPN review, we were able to find answers to questions such as:

This VPN review provides all you need to know about PureVPN.

Before we provide answers to these questions, let us consider some PureVPN pros and cons:

Fast VPN Speeds on Nearby Servers

PureVPN isn’t the fastest VPN out there, but it is decent enough. The upload and download speeds are well above average when connected to nearby VPN servers, and can serve well for torrenting and streaming.

We observed a 20% speed loss when connected to PureVPN.

PureVPN’s performance over international connections (e.g. the UK to Australia) is fairly decent too, but some connections can be frustrating at times.

As you can see, the upload speeds are not as great on distant locations, but this shouldn’t be a problem unless you plan to use faraway VPN servers for your torrenting needs. PureVPN’s ping times are average at best, so it would make sense to consider other VPN options with extremely low latency if you are a gamer.

PureVPN has over 2,000 VPN servers catering to 140 countries, which includes more than just popular destinations in Western Europe North America. Some of their servers are virtual servers, and they are marked with a ‘V’ on PureVPN’s list of server locations. All the other physical servers are owned and managed by PureVPN.

But the most impressive feature is PureVPN’s more than 300,000 IP addresses – the most we’ve seen of any VPN. This guarantees high VPN speeds and greatly reduces the risk of server congestion. PureVPN gives its users a good number of city-level server options in some popular countries. These include:

Works in China, Albeit Intermittently

PureVPN is one of only a few VPN services that bypass China’s Great Firewall, despite the recent crackdowns on VPNs in the country. To set up your VPN for China, you would have to contact PureVPN’s customer service so that you can get it right. The process can be complex as it involves lots of manual configuration, and even then, PureVPN is becoming less and less reliable in China.

Though PureVPN has a huge server network and will likely provide servers in free-speech countries nearby, you may want to consider other VPN providers like ExpressVPN that offer simpler and more comprehensive solutions for countries with high censorship such as Russia and Saudi Arabia.

Dedicated Servers are Compatible with Streaming and Torrenting

If you’re looking to a fast and easy way to unblock all the major streaming services, PureVPN is an ideal choice. With its optimized VPN servers, PureVPN unblocks over 20 TV streaming channels and servers, including Netflix, BBC iPlayer, Amazon Prime Video, ESPN, Sky TV, ABC, and Hulu. During our regular tests, we didn’t experience any issues accessing Netflix via PureVPN’s optimized server, but we were only able to stream BBC iPlayer intermittently, so you may have to try a few different UK servers before you can access BBC iPlayer.

Kodi fans and torrenters would find PureVPN to be a good option, as the VPN allows P2P on most of its servers and the speeds are great. Unfortunately, PureVPN’s UK, US, Australia, and Canada servers do not allow torrenting for legal reasons. But with lots of nearby servers in Central America and Western Europe, this wouldn’t be much of an inconvenience for you.

PureVPN prioritizes user privacy, as its IP leak protection and VPN kill switch help to protect your identity while torrenting. However, its logging policy is a bit suspect, which may not be ideal for torrenters.

Before now, we hardly recommended PureVPN for privacy-conscious individuals as a result of certain privacy related controversies surrounding the VPN’s logging policy, but a recent improvement means that this isn’t a problem anymore.

The PureVPN app selects the ‘best’ VPN protocol on default when you sign up, but we recommend OpenVPN as it is truly the best protocol in terms of privacy and overall performance. The encryption method is the impenetrable AES-256.

The VPN kill switch is another important feature, as it blocks web traffic in the event of a VPN connection drop, preventing snooping eyes from discovering your original IP address. PureVPN also has effective protection against IP, DNS, and WebRTC leaks, giving you the peace of mind you need during your online travels.

The PureVPN app also has a split tunneling feature, which allows you to route specific traffic via the VPN and leave the remaining traffic to pass through an unencrypted channel.

At this point in the VPN review, you are probably noticing a recurrent theme: PureVPN loves to make huge promises, but for some reason, they find it difficult to keep any of them.

The VPN provider has had to battle controversies surrounding its logging policy in the past, which makes us a bit skeptical about the service.So, you may want to consider other VPN services with strong zero-logs policies, like PrivateVPN or CyberGhost.

An important case study in October 2017 questioned PureVPN’s logging policy: the FBI was able to identify an accused person by tracking the IP address of the PureVPN server used to perpetrate the crime. Truth is, we do not in any way support criminal actions, but we are concerned because PureVPN only told users it logged their bandwidth used and connection times. Unknown to users at the time, PureVPN actually logged their IP address.

However, PureVPN has put in effort to revamp its logging policy and redeem itself by introducing a new logging policy which only stores information about your ISP, total bandwidth used by a customer, and the date you connected to a specific VPN server location. The VPN provider does not log DNS requests, your true IP address, connection timestamps, and the IP address of your preferred VPN server.

This means that your online activity cannot be used to personally identify if you are connected to PureVPN’s servers. This has restored some form of confidence in the VPN service.

PureVPN was launched by GZ Systems Ltd in 2007. The parent company operates under the laws and regulations of Hong Kong, which is well beyond the reach of intrusive destinations like the EU and US. According to PureVPN, Hong Kong was specifically chosen as they do not impose data retention laws, meaning that VPN services are not legally required to store user data or share it with anyone.

Incredibly Easy to Setup Custom Apps, but a bit Old-fashioned

PureVPN’s custom apps are very easy to setup, even if you are an inexperienced VPN user. All you need to do it download the software and follow the installation prompts. However, its user experience has been found wanting in some areas.

Though PureVPN’s main dashboard is pretty easy to use and can be customized to fit your needs, the desktop apps feel awkward and old-fashioned. Still, PureVPN has some well-organized options for users who want to configure the app to their taste, and there are clearly written guides that go with the advanced options, making it easy for users to find their way around.

PureVPN provides custom apps for a number of devices, including Microsoft Windows, iOS, MacOS, Linux, and Android. Its apps are easy to install, setup and use, and you can connect up to five devices simultaneously.

In terms of providing optimized apps for Android TV and Amazon Fire TV Stick, PureVPN is unique. All PureVPN users need to do is download the VPN’s software from the app store and you’re good to go for your streaming needs. You can also protect your other streaming devices like PlayStation and Xbox via the PureVPN app by connecting them to a configured router; this router then encrypts traffic on all the connected devices.

PureVPN’s customer support service is decent, but could do with a bit of a revamp. The VPN also has a 24/7 live chat feature, which is very helpful as users can receive support at just about any time. The customer support agents are always prompt and courteous in their responses, though they are not as knowledgeable when it comes to technical queries. This is pretty the same case for the email support.

The longer the duration of your subscription plan, the less you’ll have to pay on a monthly basis. A standard monthly subscription costs $10.95, but you’d have a massive  on the two-year plan which costs just $3.33 per month. The annual plan costs $8.33 per month. PureVPN is certainly a strong contender when it comes to budget VPN options.

PureVPN accepts a range of payment options, including credit and debit cards, Alipay, PayPal, and cryptocurrencies like Bitcoin and CoinPayments.

PureVPN does not have a free trial option, but users can sign up for a three-day trial account with no usage restriction or data cap at $2.50. This fee is non-refundable under any circumstances, even if there is a technical glitch. Still it is a good way to test the PureVPN service without worrying about your data usage.You can also take advantage of its 31-day money-back guarantee. The VPN service operates a genuine no questions asked refund policy, so you can request a refund if you are not satisfied with the service.Every refund request is processed within a 30-day timescale.