More than 400 hours of videos are uploaded, on average, to YouTube per minute. There’s no denying that YouTube video streaming has taken over the video sharing and streaming world, becoming a go-to resource for learning and entertainment.

Whatever your case may be, we understand the raw frustration that comes from having a video you desperately want to see blocked. Thankfully, there are a good number of ways to bypass YouTube firewalls and geo-blocks.

In this guide, we will be showing you how you can access YouTube from anywhere in the world. We will give you a number of different options, as well as our primary recommendation, and you can choose that which works best for you.

YouTube blocks vary from individual to individual. If you’ve encountered a YouTube block, chances are your network administrator has restricted your access using a firewall. It’s also possible you’re suffering a YouTube block due to government restrictions.

In general, the reason for your block will depend on where you’re trying to access YouTube from. Consider three primary locations and the possible reasons for the blockage:

Your school is a place of learning, and schools want you properly focused during school hours. To this effect, network administrators in schools typically restrict students from accessing inappropriate content. The same holds true for offices who consider YouTube a distraction to employees, and block access to the site in order to boost worker productivity.

In either case, you want to weigh your decision carefully before attempting to bypass the YouTube block. Laws and regulations are made for your benefit. Breaking these laws could attract punishment.

Certain countries enforce strict online censorship for a variety of reasons, and have YouTube blocked. While some of these countries wish to control what you consume online, others simply want to create room for local competitors to thrive.

Countries with sweeping YouTube block0s include, China, North Korea, Syria, Turkmenistan, and Iran. In the past, it’s also had full blocks from Russia, Thailand, Sudan, and Pakistan. With YouTube blocked in your country, the site will be completely out of reach.

On the other hand, you may find yourself staring at a message that looks like this: 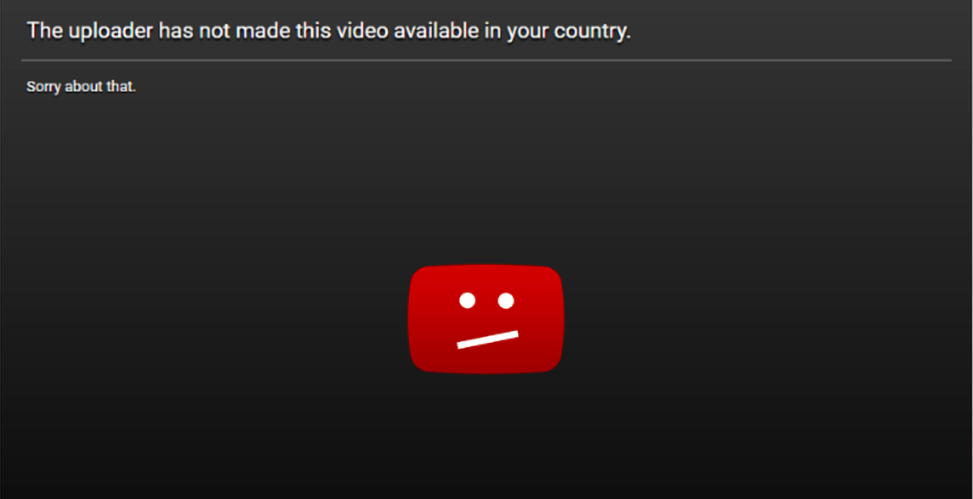 In this case, YouTube isn’t completely blocked in your country, just censored. The reason for this censorship could be due to copyright laws, or to prevent particular “objectionable” content from filtering in.

Amongst countries that routinely censor particular YouTube videos are Russia, Sudan, Tajikstan, Turkey, and Australia. You may also find specific content on YouTube censored in your country, even if it isn’t on this list – particularly for copyright reasons.

The easiest, most secure and anonymous way to unblock YouTube is by using a VPN. A VPN masks your original IP address, replacing it with one from their remote servers. Because your traffic goes through this server before getting to its destination, a VPN is able to fool any network or regulator into thinking you’re accessing YouTube from a different country.

Using a VPN allows you select a favorable nation as your virtual location. This, in turn, frees up access to any YouTube content accessible from within that country. It also encrypts all data, ensuring neither your network administrator, nor your ISP will be able to see what content you’re viewing.

Thankfully, you won’t have to run steps 1-3 again after the first time. Subsequently, all you’d need to do is run the app, connect to a server, and browse.

Generally recognized as the fastest VPN on the block, ExpressVPN is an excellent choice for YouTube streaming. All of its over 3,000 servers are optimized for speed, keeping endless buffers at bay during your streaming session.

Premium and cheap is Surfshark’s target. And they deliver on this perfectly! Surfshark has quickly become a favorite for its top-level security, with a kill switch, OpenVPN encryption, DNS leak protection, split tunneling, double-hop VPN, and obfuscation. It is also strong on privacy.

With over 1,700 servers around the world, Surfshark successfully unblocks YouTube from anywhere in the world. It also unblocks other streaming sites like BBC iPlayer and Netflix. Throw in its automatic Wi-Fi protection and anti-malware function, as well as its incredibly low prices and unlimited simultaneous connections, and this is an excellent choice.

Based out of Romania, CyberGhost is renowned for its streaming capabilities. It successfully unblocks YouTube, whether your ban is from your school, work, or country. It has an extremely large server network, with over 6,000, and also perfectly unblocks Netflix, Hulu, Amazon Prime Video, and more.

CyberGhost provides users with beyond average streaming speeds, ensuring you enjoy smooth HD streaming. It includes a kill switch, DNS leak protection, and OpenVPN protection, for security. And a well enforced no-logs policy for privacy. With its dedicated streaming servers, you can unblock any streaming service and enjoy the best possible speeds while at it.

You can find more of our preferred VPNs for streaming here, and more on the fastest VPNs we ever tested here.

Proxies are yet another popular method of unblocking YouTube. You can think of a proxy as a less secure, less reliable VPN. Like a VPN, it filters your traffic through its servers, virtually switching your location in order to grant you access to otherwise blocked content.

There are three typical ways of connecting to a proxy:

Proxies generally allow you access blocked websites at no personal cost. But because they aren’t as secure or as private as VPNs your network administrator, ISP, and any internet censorship watchdog will find out what you’ve done anyway. A proxy’s porous nature also leaves your PC open to malicious attacks from visited websites.

It’s worth noting, though, that you’d have to refresh your proxy every time you load a new page, or your connection will be lost. It’s also important to note that good free proxies are more difficult to find today than ever before. If you do not find one, you’d be best served splurging out on a VPN than a paid proxy.

Unfortunately, you’d need to know what the video contains to ensure it’s related to your needs before download. Typically, your process should flow like this:

This process does have its demerits, though. The process is generally slow and tiring. You may download videos that you later find out do not fit your needs. And most of these sites are filled with ads that make the download process even longer than should be.

A VPN helps keep your connection private, keeping it off the eyes of ISPs, network administrators, and censorship authorities. But selecting a VPN isn’t exactly an easy task. The above guide features our recommended VPNs for YouTube unblocking, and we’re absolutely certain you’d love them.

What if my VPN is blocked too?

Network administrators and ISPs have caught on to the fact that proxies and VPNs are engaged to bypass restrictions. As a result, they’ve begun blacklisting IP addresses associated with VPNs and proxies, too. This is why you may find that your current VPN is blocked.

Our best VPN for streaming, including those recommended above, are top of the line VPNs with obfuscation technology. Some others employ port forwarding technology. Both systems help make your traffic unrecognizable as VPN traffic, ensuring you’re always able to unblock YouTube.

Can I use a free VPN to unblock YouTube?

There are a ton of free VPNs out there that promise to bypass geo-restrictions and network blocks, at no cost. Unfortunately, free VPNs come with plenty of limitations. Their servers are generally too few, leading to overloaded traffic and slow connections.

They also lack features like obfuscation, meaning they’re easily found out as VPN traffic, and blocked. And a good number of them come packed with a ton of security and privacy risks.