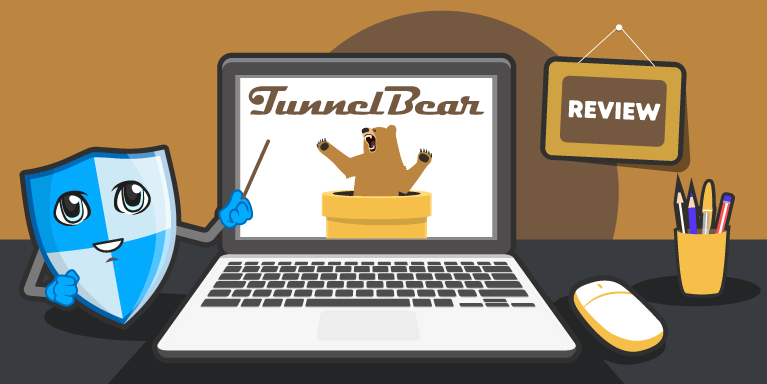 TunnelBear is a Canada-based Virtual Private Network (VPN) that offers users protection against hackers, their own Internet Service Providers (ISPs), and any prying eyes in a network. The VPN service guarantees the security of online surfers, even when they are connected to a public Wi-Fi. This is because TunnelBear secures both secured and unsecured public networks.

Our full VPN review discusses the above questions and lots more, but first, let us consider some of TunnelBear’s pros and cons.

But is TunnelBear exactly what it promises? We have extensively reviewed this VPN service, and would provide answers to questions such as:

Before we provide answers to these questions, let us consider some TunnelBear pros and cons:

TunnelBear’s speeds are not as impressive as some of the best VPN services out there, but you can get decent speeds for same-country VPN connections. When connected to a nearby VPN server, we experienced a 13% drop-off for download speeds, but we were still able to stream in HD without any trouble.

We observed a speed loss of 13% when connected to TunnelBear VPN.

Before connecting to TunnelBear:

When connected to TunnelBear:

Before connecting to TunnelBear:

When connected to TunnelBear:

The 61% drop-off in speeds we noticed when connected to TunnelBear’s US East Coast VPN server is not one of the fastest there is, but should be good enough if you are a casual internet user.

Coverage Only in 22 Countries

TunnelBear’s VPN server coverage is very small. Though the company does not tell us how many physical servers or IP addresses they maintain, but they own all of them – proof that the VPN service values user privacy.

TunnelBear’s server network covers the most popular locations such as Australia and the United States, as well as counties in Western Europe like the Netherlands, Germany, France and the UK. There is also coverage in Japan, Hong Kong, Singapore, India, as well as minimal nearby options for those in South and Central America from Brazil and Mexico.

TunnelBear is equipped with features that are designed to bypass the Great Wall of China, but more often than not, it wouldn’t work. However, some TunnelBear user feedbacks reveal that it is not all doom and gloom for the VPN service in China, as they enjoy fairly quick speeds when connected to the nearby Singapore server, and have never experienced any issues.

In order to avoid any trouble while surfing the net in China, it may be wise to choose other reliable VPN services like NordVPN and VyprVPN. But due to its stealth protocol (GhostBear), TunnelBear is still a great choice for other countries with high censorship like Turkey and Iran.

User privacy is priority for TunnelBear, despite its seemingly perky display. Your online safety is guaranteed with the VPN’s strong encryption and VPN security. TunnelBear uses IKEv2 for iOS, and OpenVPN for android and desktop VPN connections. The IKEv2 and OpenVPN protocols are really strong and offer great security, but we would have liked to see a range of protocol options within the aps. But TunnelBear still allows users toggle between UPD and TCP on MacOS and Windows, which is another interesting feature.

The ‘impenetrable’ top cipher AES-256 encryption is another amazing feature from TunnelBear. The VPN kill switch, commonly known as ‘Vigilante mode’, helps to block web traffic if there is disruption in TunnelBear connection for any reason, ensuring the security of your true IP address at all times.

To further test TunnelBear’s security, we conducted our VPN leak tests, and the VPN service passed all of it with flying colors. Protection against DNS leaks prevents your ISP from monitoring your online activity at any time.

Another great TunnelBear feature is its proprietary stealth protocol (‘GhostBear’). The protocol makes it difficult for ISPs, governments and businesses to detect your connection by scrambling your VPN communications. It also has a second layer of encryption for added security.

Torrenting But Not Ideal for Streaming Netflix

Unfortunately, TunnelBear does not work with any of Netflix or BBC iPlayer, which is really disappointing. The absence of city-level servers in its network is the major hindrance here, so if one server fails, there is absolutely no back up. Though streaming services like Netflix and BBC iPlayer are heavily cracking down on VPN providers, there are still loads of VPNs that unlock streaming services’ content.

TunnelBear is a good choice for torrenting, especially as it allows P2P activity on all of its server locations worldwide. Features such as the VPN’s minimal logging policy, good upload speeds and a VPN kill switch make TunnelBear a safe torrenting option.

TunnelBear is really close to being a zero-logs VPN service, and it has one of the most transparent privacy policies we have seen.

Keep in mind that none of these stored logs can be used to identify you personally. An analysis organized by CDT (Center for Democracy & Technology) on TunnelBear revealed that each of the VPN’s server is fortified with full disk encryption, intrusion protection techniques, and malware and intrusion scans. These features ensure the complete protection of users’ personal information.

TunnelBear was founded in 2011 in Canada, and acquired by McAfee – another Canada-based company – in 2018. As part of the Five Eyes Data-sharing alliance, Canada-based VPN services are required to comply with law enforcement agencies if legal documents, warrants or subpoenas are supplied. However, the good news for users is that TunnelBear does not collect any information that could be used to identify you as a person. And even with the acquisition by McAfee, the VPN service remains safe, secure and trustworthy.

Incredibly Easy to Set up and Use VPN Apps

Designed to appeal to its users, the TunnelBear custom VPN app interface is simple and fun to use. Its advanced features are few and well organized, making it easy for users to navigate through. The VPN apps dedicated for mobile users are also laid out in similar manner.

TunnelBear’s design is especially ideal for beginners, so if you are an advanced user and would like a VPN service with loads of options to play with, you might be better off with an alternative provider.

TunnelBear has native VPN apps designed for iOS, Microsoft Windows, Android and Apple MacOS. TunnelBear can also be used with Linux, but you would need to do some manual configuration and the VPN service support for this feature is minimal.

TunnelBear cannot be installed at router level, so there is limited level of protection to the supported devices. This means that your game consoles or streaming devices will have little to no protection. So, you may want to consider using ExpressVPN if you are looking for a plug-and-play solution for your Apple TV, Microsoft Xbox, or Sony PlayStation.

No Live Chat Feature but Service is Decent

The TunnelBear customer support service is good enough at best, as it cannot rival some of the best VPN services like NordVPN in this regard. The lack of live chat support was disappointing for us, and we even discovered that email responses could last over five hours on occasion, and this could be very frustrating for users. Unlike some top tier VPNs out there, TunnelBear users must create an account and sign in if they have any concerns, which is another downside for us.

But thanks to the clearly written resources on the TunnelBear website, non-technical persons and beginners can easily address any concerns they have without much trouble.

TunnelBear’s payment options are limited to just Bitcoin and Bitcash, and credit/debit cards. The VPN service does not accept PayPal payments or any international payment options like UnionPay and Alipay.

If, for any reason, you are not satisfied with the TunnelBear service, you can request for a refund within 30 days of signing up. All you need to do is send an email stating your request to the customer support. Your money should be refunded (in USD) within seven days of this request.