The BBC iPlayer is becoming a hugely popular streaming service. With an ability to stream everything from live sports to movies and TV shows all for free, this is no surprise. But the BBC iPlayer was designed strictly for those within the UK.

So, what if you’re an expat living abroad? Perhaps you’ve just taken a vacation and hope to continue to enjoy your British content? Or maybe you’re just a fan of the iPlayer content but you don’t live in the UK. In any of these cases, you’d need to find a workaround for your IP address if you’re to find success. 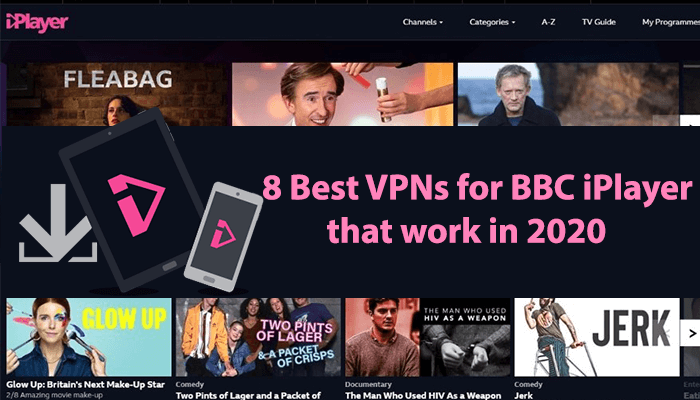 The solution? VPN. Unfortunately, BBC is very much aware of this solution. To prevent viewers from outside the UK from tuning in, they’ve invested in resources to identify and block IP addresses associated with VPNs. This is why you must carefully select the best VPN for BBC iPlayer.

How to Select the Best VPN for BBC iPlayer

Selecting the best VPN to use with the iPlayer is a not-so-straightforward affair. Before investing in a VPN, you’d do well to make sure it sufficiently checks the following boxes:

One of the fastest VPNs we ever tested, ExpressVPN is a powerhouse for streaming. Its dazzling download speeds make it a delight, with its ever-reliable servers consistently unblocking the iPlayer, despite tightening restrictions.

ExpressVPN has 3 UK server locations. Although this may seem little, its industry topping speeds rarely drop below 40 Mbps. This means you can comfortably stream in HD which requires just 5 Mbps for smooth streaming. With a built-in speed test feature, you can also find the fastest server at any moment and connect using that server.

ExpressVPN also offers unlimited data, allowing you binge watch as many shows as you desire without having to pay extra. And an interesting flagship feature – “Split tunneling” – enables you control which apps have their traffic routed through the VPN.

Of course, it also passed our security tests, with its robust military-grade encryption safely keeping your personal data concealed. A 30-day money-back guarantee, and an impressively enforced privacy policy round up the features that make ExpressVPN so appealing.

You can also check :ExpressVPN Reviews

Between ExpressVPN and NordVPN, it can be mighty difficult to select which comes tops. Operating over 600 servers in the UK alone, it’s no surprise this VPN features so highly on our list. And with speeds only matched by ExpressVPN, NordVPN is an excellent choice for streaming.

Its proprietary “SmartPlay” feature is specifically designed for streaming. This feature works to bypass the toughest of geo-blocks by combining Smart DNS with VPN technology. And it successfully unblocks the iPlayer from abroad every single time – even from China.

NordVPN also offers unlimited data and bandwidth with its subscription, allowing you enjoy superfast streaming with no caps whatsoever. Its large number of servers coupled with its super download speeds ensure you stream seamlessly even during peak internet hours.

And if you want to make doubly sure that you’re safe from BBC detection, ExpressVPN allows you purchase a dedicated IP address just for you. This ensures you stay out of the BBC iPlayer IP blacklist as the minimal traffic doesn’t trigger their systems.

You can also check : NordVPN Reviews

Heralded as one of the best VPNs for VPN newbies, CyberGhost makes unblocking geo-restrictions easier than most. With over 400 servers in the UK alone, the VPN successfully unblocks the BBC iPlayer every single time. And this makes it one of our top picks for iPlayer streaming.

Wondering which server to connect to? CyberGhost makes the process incredibly easy, selecting the best server for your streaming site. By simply selecting BBC iPlayer from its streaming profile options, it connects you to an optimized server for the site.

Although CyberGhost isn’t quite as fast as the other two VPNs ahead of it, it provides top streaming speeds. And for as long as you stick with the optimized servers, you’d never run into any streaming problems.

As with other VPNs on this list, CyberGhost offers both unlimited data and bandwidth. Its app is incredibly easy to set up and begin streaming. And a generous 45-day money-back guarantee gives you enough time to test out the app and decide if you’d be sticking around.

If budget had to meet quality at any point on a graph, that point would be Surfshark. This VPN may only be a year old, but it is packed full of premium features that rivals any other.

To make its offering even more appealing, Surfshark provides unlimited data, unlimited bandwidth, and unlimited simultaneous connections. There are no limits with Surfshark. But it wouldn’t be here if it didn’t consistently unblock BBC iPlayer.

Surfshark has a small server network with just 1,400 servers globally and 3 UK servers compared to most providers on this list. Still, it offers plenty of IP addresses and blazing download speeds that rival the biggest players on the list, making it a reliable streaming option for the BBC iPlayer.

Thanks to its proprietary “Camouflage Mode”, Surfshark successfully unblocks even the greatest of firewalls in China and Russia. And, like NordVPN, it comes with a Whitelist split tunneling feature that improves your flexibility, allowing you select what you desire to pass through the VPN.

The cheapest VPN on our list, Ivacy successfully unblocks the iPlayer time and again. Based in Singapore, the VPN comes with strictly enforced privacy laws that evokes confidence during usage.

Its UK servers are optimized for streaming, hitting admirable download speeds that effortlessly stream HD and 4k content. It’s no surprise, then, that not only does Ivacy successfully unblock the BBC iPlayer, it also works seamlessly with other UK streams like Channel 4 and ITV Hub.

Ivacy keeps absolutely no logs, so you don’t need to worry about your data being handed over to others. Its OpenVPN encryption protocol also keeps your data secure while browsing the internet. And with a reliable 30-day money-back guarantee, you can test out the waters to see if you’re comfortable with the spend.

You can also check: IvacyVPN Reviews

PrivateVPN is just about the smallest VPN company on this list. With only 100 global servers, 6 of which are in the UK, PrivateVPN doesn’t exactly boast a formidable network of servers. Still, that hasn’t stopped it from successfully breaking through the tough geo-blocks by BBC iPlayer.

PrivateVPN is really easy to use, making it one of our favorites for beginner VPN users. It is also reliable, with all 6 of its UK servers able to unblock the iPlayer. For even greater assurance, you could connect to the BBC iPlayer optimized server in London.

The VPN also offers impressive speeds that make your streaming process entirely flawless. Considering its rather small network of servers, its speeds are hugely impressive. Throw in unlimited data and bandwidth, plus an ability to unblock other streaming sites like Netflix, and this will sure be a worthwhile investment.

You can also check : PrivateVPN Reviews

Its sleek app may be its most visible feature at first glance, but VyprVPN is more than capable of playing in the big leagues. It perfectly unblocks BBC iPlayer, ensuring you seamlessly stream your desired British content from anywhere in the world.

Based out of Switzerland, VyprVPN has about 700 servers and 20,000 IP addresses in its worldwide network. Its servers are reliably fast, although it’s not the fastest on this list. It has also successfully proven its no-logs policy by receiving a full third-party audit of its servers.

Although it isn’t the best VPN on this list, VyprVPN is a steady, reliable option. Its friendly interface is easy to navigate. And with a 30-day money-back guarantee, you can take the time to check out how you feel about spending on this VPN.

You can also check : VyprVPN Reviews

Yet another “small” VPN on this list, SaferVPN has a mere 700 servers in its network. Still, it provides top speeds that rival just about every other VPN on this list. It is also incredibly easy to navigate through its intuitive, uncomplicated interface.

Despite its limited number of servers, SaferVPN has a large selection of UK IP addresses. This means it will be a difficult VPN to stop for any streaming service. It also has dedicated streaming servers, which come together to help it deliver reliable streaming performances.

Although SaferVPN currently lacks perfect forward secrecy, it still boasts a strong enough encryption to calm your nerves. And its enforced no-logs policy ensures your privacy is maintained. Again, unlimited bandwidth and data round up the package for us on this one.

You can also check: SaferVPN Reviews

How to Use a VPN for BBC iPlayer

The most important aspect of using a VPN with the BBC iPlayer is selecting your desired VPN.

With that out of the way, your process should generally follow this pattern:

How much is BBC iPlayer subscription?

Yes, it does. Using a VPN takes your internet requests and responses through a longer route. This easily leads to a drop in overall connection speeds. Thankfully, the fastest VPNs are barely affected by the traffic routing, delivering almost unchanged speeds.

BBC iPlayer is completely free to use. To create an account, though, you’d have two important requirements. The first is a UK postcode which can be gotten online. Then you’ll need to tick the box that asks if you’ve got a UK TV license.

Few streaming services have as tough a geo-block as the BBC. Its systems easily detect VPN technologies and blacklists associated IP addresses. This means only a select few VPNs can get past their blocks. Indeed, VPNs like PureVPN which used to successfully unblock the iPlayer are no longer able to do so. If you notice that your preferred server no longer works, switch to another.

Few streaming services have as tough a geo-block as the BBC. Its systems easily detect VPN technologies and blacklists associated IP addresses. This means only a select few VPNs can get past their blocks. Indeed, VPNs like PureVPN which used to successfully unblock the iPlayer are no longer able to do so. If you notice that your preferred server no longer works, switch to another.

While this isn’t entirely impossible, we’re yet to find a free VPN that is sophisticated enough to unblock the iPlayer. And those that do typically don’t last long. Considering just how much BBC invests in identifying VPN-associated IPs, this is hardly a surprise.

Can I watch BBC iPlayer without a UK TV license?

Yes. Although BBC iPlayer asks if you do have a UK TV license while creating an account, it depends on you to be honorable when answering that question. This means there’s no stringent process in place to confirm your claims. All you’d really need to access BBC iPlayer is a UK IP address and a UK postal code.

Is it illegal to use a VPN with BBC iPlayer?

No one has ever received a court order regarding the use of a VPN with iPlayer. While BBC would rather you only watched from within the UK due to their obligations, it isn’t illegal to do so with a VPN.

Yes, you can. When accessing iPlayer using a VPN, you appear to be a bonafide UK resident. This means you enjoy all of the features available to UK users, which includes downloading programs within the app.