Your home PC is a goldmine. It is your source of entertainment when home, your personal shopper, and your research guide. All of these make it a very important gadget for you – and for data watchers!

From your internet service provider (ISP), to the government, ad agencies, search engines, data sellers, and hackers and fraudsters, there’s a lot of persons trying to track everything from your internet traffic to your personal data, depending on their interests. The only way to stop them? A VPN. 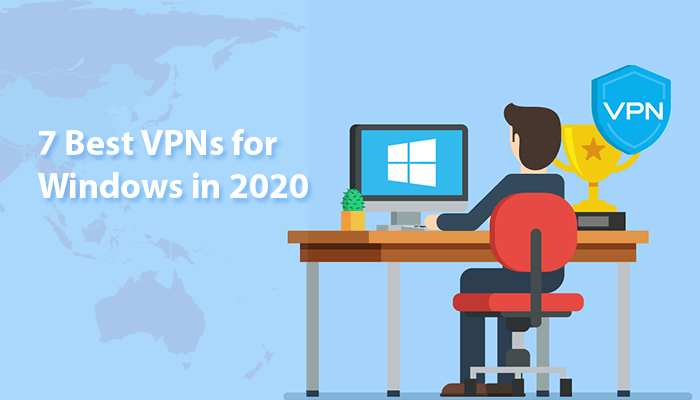 A VPN for Windows stops data watchers in their tracks. The best VPNs for Windows mask your IP address, concealing your internet traffic by mixing your data with those of others. It also protects you from watchers on public Wi-Fi networks, and opens up access to geo-blocked content.

How to Select the Best VPN for Windows

How do you successfully weed through the bunch of VPNs on the market? There are a number of critical factors to be considered when selecting a VPN for your Windows PC. These include:

Here’s our top three VPNs of Best VPN For Windows:

What are the Best VPNs for Windows?

ExpressVPN ranks top of our list for Windows VPNs. It is the fastest VPN on this list, offering secure, high speed internet access on all of its 3,000+ servers. But that’s not all there is to this VPN.

ExpressVPN comes off the shelf with top of the line features. It uses the airtight AES-256 encryption to conceal your traffic and keep it off the sights of your ISP. It also comes with a kill switch, DNS leak protection and OpenVPN encryption to keep your internet traffic protected at all times.

Based in the British Virgin Islands, ExpressVPN is beyond the reach of the “14 Eyes” alliance. This means that it can strictly keep to its zero-logging policy, ensuring the complete privacy of your personal data. And if you want to enjoy even more privacy, you’re free to make payments using Bitcoin.

With servers in over 160 locations, ExpressVPN is able to bypass geographic restrictions in over 100 different countries, and unblock streaming services like Hulu, iPlayer and Netflix easily. Thanks to its split tunneling feature, it’s also a great VPN for torrenting.

Also important to us was the ease of use of ExpressVPN’s dedicated Windows client. Location selection and change is super easy and a “Smart Location” feature auto selects the closest server to you for even faster connections. Still, what we loved the most was the 24/7 available and responsive customer support.

Renowned for its extreme privacy and robust unblocking capabilities, VyprVPN is a great VPN for Windows users.

VyprVPN is based in the privacy friendly nation of Switzerland. This puts it out of reach for both the “5 Eyes” and “14 Eyes” alliance. It follows a strict no logs policy, and operates all of its servers itself, meaning there’s no potential third party access whatsoever to your data.

Although it ranks low for its number of servers – with just 700 – compared to other big shots on this list, its servers in 70 different locations combined with an impressive 200,000 IP addresses allow it comfortably unblock services like Hulu, Netflix, and BBC iPlayer.

Security is assured using its kill switch and DNS leak protection. A unique Chameleon technology allows it get around tricky state-imposed firewalls in countries like China and Iran. And, with VyprVPN’s impressively easy to use Windows app, you can set up in just a few clicks.

With a server network covering over 5,300 servers, NordVPN has one of the biggest server counts on this list. And for good measure! Known for its extreme security measures, NordVPN is sturdy, reliable, fast, and impressively versatile.

NordVPN is based out of Panama, a privacy-friendly country beyond he reach of the 5/9/14 Eyes alliance. It has a clear no logs policy, which we’ve found to be true so far, so you’re sure your internet traffic is completely protected.

For security, NordVPN employs the robust AES 256-bit encryption. It uses the OpenVPN protocol, which it combines with its unique Double VPN setting and a kill switch for improved security. And, your security can be further improved by choosing to route your traffic over the Tor network.

Impressively, NordVPN also comes with its own built-in ad blocker, CyberSec. CyberSec is free to use for NordVPN owners, automatically blocking trackers, malware and ads when deployed.

NordVPN has an intuitive, easy to use Windows client. It securely accesses torrenting sites, and can unblock over 400 geo-blocked streaming services. It also works nicely in China, a country known for its tough internet censorship.

Private Internet Access (PIA) is one of the more interesting VPNs on this list. Its highly customizable Windows app makes it a favorite for many. But it’s in its security and privacy features we take the most delight.

PIA enforces a strict zero-logs policy. Despite being based in the US, this policy ensures there’s no data to be found by authorities, even if they get hold of a warrant. And PIA has a history of proving this in countless court battles.

PIA comes with a 128-bit Encryption by default. But this can be changed to a higher encryption in the setting interface. It also offers DNS leak protection and comes with an auto kill switch. Its MACE feature also improves security with its ad, malware, and tracker blocking capabilities.

With over 2,500 high-speed servers, PIA is able to unblock multiple streaming services, including Netflix and Hulu. And with a 30-day money-back guarantee on any purchase, you can safely test out the VPN to confirm it matches expectations.

Yet another US-based VPN on our list, IPVanish has a strong no logs policy that keeps our mind at ease. With its 256-bit AES encryption, a solid OpenVPN protocol, DNS leak protection, and a built-in kill switch, it also assures of your security.

IPVanish is a great VPN for torrenting, thanks to its P2P support and SOCKS5 protocols. And with over 1,400 superfast servers in more than 60 countries, IPVanish is able to unblock most streaming services, including Neflix, BBC iPlayer and Hulu.

We particularly enjoyed navigating its Windows client. Easy to use, multi-language support, and a pack of features to satisfy even the experts, IPVanish is a top VPN that every user will sure enjoy.

Surfshark is one of the cheapest premium VPNs for Windows you’d ever come across. It is also a very recent VPN provider. Still, it’s about as solid as any VPN on this list and is incredibly easy to use.

Based out of the British Virgin Islands, Surfshark is home to about 1,700 servers in more than 60 countries. This puts it among the top contenders for geo-restriction unblocking. It comfortably accesses streaming networks like Amazon Prime Video, HBO GO, and Netflix, among others.

Its security provisions are also top of the line. A strong military grade encryption is paired with an automatic kill switch and a no-logs policy to provide data security. For extra protection, it offers features like Double Encryption, No Borders Mode and Camouflage Mode to bypass government censorship, and keep your ISP from detecting your VPN connection.

Like NordVPN, it boasts its own ad blocking feature known as the CleanWeb technology. And with an allowance for unlimited simultaneous connections, you can comfortably protect all of your devices at the same time.

Over 5,700 servers are in the CyberGhost server network, making it one of our best VPNs for server count. And with these VPNs in more than 100 locations, it’s no wonder CyberGhost has such a large unblocking capacity.

CyberGhost is based out of the privacy-friendly nation of Romania. It enforces a strict no-logs policy, uses 256-bit encryption, and deploys an auto kill switch to block internet traffic when your connection strength drops.

CyberGhost has an easy to use Windows app that intuitively tells you all you need to do to get it working. The app rigidly implements its OpenVPN protocol to keep your data secure. And while its speeds may not match those of NordVPN and ExpressVPN, it remains an excellent choice for streaming.

Do I Need a VPN for Windows?

Beyond cybercriminals, a VPN also helps ensure your privacy. It keeps your data from your ISP and the government. It protects you over unsafe Wi-Fi connections. And it enables you access content that will otherwise be barred in your location.

Should I Use a Free VPN?

We wouldn’t typically recommend a free VPN for Windows. They are mostly unsafe, with compromised security features. It’s also not uncommon to find them in data racketeering schemes as they seek to make a profit for their services.

However, there are a number of trustworthy free VPNs for Windows. These VPNs are mostly freemium versions of premium providers, meaning they already receive payment for service. As a result, they feature impressive security and privacy provisions, and are trusted for their unblocking capabilities.

Does Windows 10 have a built-in VPN?

As we earlier noted, Windows 10 comes with impressive security features over other iterations of Windows. Its built-in VPN provides a point to point tunneling protocol that adds an extra layer of security to your browsing. But it doesn’t give you all of the features third-party VPN providers afford you, and it is rather complicated to set up.

How do I Set up a VPN on my Windows PC?

If you’ve chosen to get a VPN for Windows, your primary task will be selecting a solid VPN with an easy to use native client. For that, you can check out our list of the 7 best VPNs for Windows above. With the selection complete, your process should look like this: