10 FASTEST VPNS In 2020 that Cleared Our Speed Test

VPNs are a wonderful addition to our traditional toolkit, whether on PC or mobile. They ensure privacy and security while surfing the internet, and have become a critical part of our online activity.

On its day, the VPN helps dissociate us from traffic we wouldn’t want to our name, shields us from potentially dangerous elements online, and enables us access otherwise blocked content. These are all fine and good, but no one would really enjoy all of these if the internet connection wasn’t fast enough. 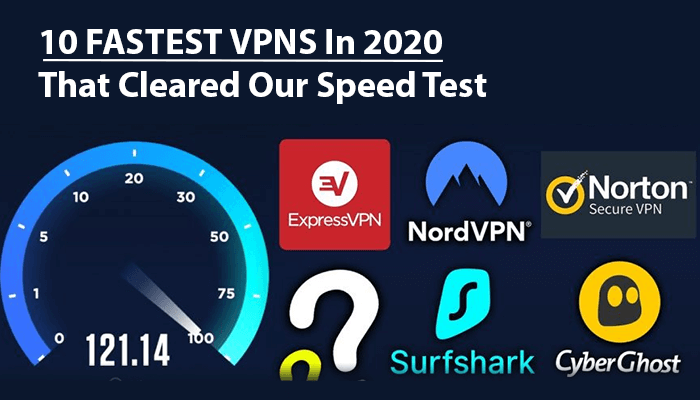 Truth is, VPNs slow down your connection. Because they encrypt your data and route your traffic through a server in another location, it takes a tad longer for it to arrive its destination. But this natural side effect shouldn’t make your streams buffer on end, or leave you with frustrating download speeds.

Unfortunately, a good number of VPNs promise top notch speeds, only to leave you with annoying download speeds. This is why we’ve taken the time to identify the fastest VPNs around the block. These VPNs are fast enough to help you enjoy a smooth internet experience, with top-level security.

How we Test VPN Speeds

Before recommending a VPN, we go out of our way to measure its speed and decide if its fast enough for users. To this end, we measure our internet speed before and after we connect to a VPN, take note of the various points, and use this data to judge which VPN is faster.

Why before and after? Simple, VPNs will naturally slow down your connection a notch. The VPN that necessitates the lowest decline in connection speed is generally identified as the fastest. The fastest of VPNs are good enough for streaming, downloading, and even torrenting.

In case you’d want to test one for yourself, your process should look something like this:

To identify the fastest VPNs, we repeat the above process for a ton of different VPNs, generating tens of data points per VPN. We also test the speed during usage in real world cases. Afterwards, we identify the individual averages for each VPN, and group average for all VPNs. VPNs with the lowest percentage declines rank higher on our list.

Note:Internet connection speeds are affected by many different variables. Your ISP and the number of persons using the internet at the same time all play a part. This is why we don’t simply connect to a VPN and take the speed, but instead measure the rate of decline.

After conducting exhaustive tests, we’ve rounded up the 10 fastest VPNs that enable hitch-free downloading, torrenting and streaming on their servers. These VPNs also carry top-level security systems and enforce attractive privacy policies, so there really is no trade-off.

With over 5,700 servers in 90 countries, CyberGhost has one of the widest server networks of any VPN on this list. An incredibly easy to use VPN, CyberGhost consistently delivers download speeds that make small work of torrenting and streaming. And for even better performance, CyberGhost provides optimized P2P servers for streaming and torrenting.

CyberGhost does well to unblock popular streaming websites like Hule and Netflix. And, while its download speeds don’t cut it close to the top performers on this list, it does deliver crisp, clear quality when streaming. Its privacy and security features also rank among the very best for any VPN we’ve ever used.

Ranked by some as the fastest overall VPN, Private Internet Access did more than impress us with its speeds. With just over 3,300 servers in 32 countries, Private Internet Access boasts a large server network, with multiple servers in single locations. This means you’d have more than enough options when selecting, hardly finding a congested server.

On its day, PIA leads to a mere 7% drop in connection speed with a US server. But this number drops as the distance increases, reaching about an 80% slowdown for Australian servers. Still, with its ability to unblock most streaming services, support for torrenting, a default ad blocker, and a robust security system that lets you select your most preferred protocols, this is a VPN we rate highly.

Renowned for its extreme privacy and robust unblocking capabilities, VyprVPN is a great VPN for Windows users. Consistently in a battle with ExpressVPN, NordVPN could easily outrank ExpressVPN on its day. Its blazing download speeds are a key figure in its popularity. With over 5,300 servers in its network – the bulk of which >support P2P connections – it’s no wonder just how fast NordVPN can get. And since the launch of its own custom VPN protocol NordLynx, this speed has only shot up the charts.

With its ability to unblock streaming sites like Hulu, Netflix, HBO, etc., NordVPN is a streamers favorite. Its airtight security consists of layers of impenetrable encryption, coupled with leak protection and an auto kill switch.

You can also check : NordVPN Reviews

With over 3,000 servers all optimized for speed in 94 countries, ExpressVPN consistently tries to outperform itself on our ranking of the fastest VPNs. Its impressive download speeds are made even more so by the fact that ExpressVPN connects smoothly with long-distance servers. On average, this VPN had an 18% speed drop, although the closest servers recorded between 0 and 3% drops.

ExpressVPN also successfully unblocks streaming websites like Netflix, Hulu and BBC iPlayer, making it a great all-rounder for streaming. It provides P2P support for torrenting, and successfully breaks past state censorships in China, Russia and the UAE. Throw in its great security and privacy features, and it’s not hard to see why we rate it so highly

You can also check :ExpressVPN Reviews

Surfshark may be the new kid on the block, but its performance belies its supposed lack of experience. Based out of the British Virgin Islands, Surfshark has a limited 1,000+ servers spread across 61 countries. Still, it provides speed drops of barely 10% on its top servers, ensuring you enjoy smooth internet connections whenever you need.

Surfshark also provided reliably steady download speeds, hardly ever fluctuating wildly by itself. Should you wish to torrent, Surfshark provides torrent-specific P2P servers that give you even much higher download speeds. It also successfully unblocks Netflix and its kind, while lifting off the toughest censorships and blocks.

PrivateVPN is very much a little giant when you consider it has only 150 servers in its network. Still, it has just enough to rattle even the big guns on this list with its speed. Despite being a relative newcomer, it successfully unblocks streaming sites like Netflix and BBC iPlayer. It also seamlessly streams 4k and HD videos, and easily downloads large files.

With all of PrivateVPN’s servers optimized for streaming and P2P torrenting, it’s no surprise they consistently punch above their weight. However, it’s also no surprise that peak internet hours may lead to considerable drops in speed – although never enough to water down the quality of your streaming.

With its top of the line security and privacy features, plus a 30-day money-back guarantee, you can safely try out the VPN to see if it matches your needs.

You can also check : PrivateVPN Reviews

Yet another surprising addition to our list, StrongVPN enabled us achieve download speeds well above the overall average. One of the older VPNs around, StrongVPN had since fallen off its perch until a recent app re-design got it back up and running.

You can also check: StrongVPN Reviews

Like StrongVPN, Hotspot Shield has been around for a long time. And while it doesn’t provide the fastest service on this list, it sure does enough to warrant its spot. Since being acquired by Pango, Hotspot Shield has made good strides in privacy, security and performance.

Hotspot Shield has over 3,200 P2P-optimized servers in its network. These servers are suitable for torrenting , and successfully unblock Netflix, Hule, Amazon Prime Video, and other streaming services. Its security features include leak protection and 256-bit encryption.

But you might want to back pedal if you need complete privacy. While it doesn’t keep records of your online activity, it stores identifying records like your device model and operating system. It also has one of the lowest supports for simultaneous connections, with only 3 devices allowed at once.

Based in Switzerland with only 700 servers in its network, VyprVPN has consistently punched above its weight since it emerged. Its average download speeds of over 20 Mbps are more than the required 5 Mbps needed for HD streaming. Indeed, VyprVPN – much like CyberGhost – can shave off as much as 50% of your original download speed.

Still, VyprVPN successfully unblocks streaming sites like Netflix, has more than sufficient speed for quality streaming, and supports both online gaming and torrenting with minimal fuss. It does provide excellent security and privacy solutions regardless, but you’d need to look elsewhere if you want top notch torrenting and gaming speeds.

You can also check : VyprVPN Reviews

Averaging just over a 60% reduction in speed might sound a tad ridiculous, but IPVanish still produces enough speed to enable smooth streaming. The VPN may take a chunk out of your download speed, but it isn’t exactly slow either. With over 1,300 servers in 70+ countries, it also does a great job of unlocking regional blocks.

IPVanish also impressively bypassed blocks by streaming networks like Netflix, Hulu and HBO GO, but it also struggled to breakdown the anti-CPN mechanism of BBC iPlayer. Still, this is a decent option for those who simply want a VPN for minor tasks.

You can also check: IPVanish Reviews

Does using a VPN affect my internet speed?

Yes, it does. Using a VPN takes your internet requests and responses through a longer route. This easily leads to a drop in overall connection speeds. Thankfully, the fastest VPNs are barely affected by the traffic routing, delivering almost unchanged speeds.

Unfortunately, free and fast hardly work hand-in-hand. Even the best free VPN services, known to have premium packages, also limit the number of servers you can access. This, coupled with caps on bandwidth and data ensure you really don’t enjoy the best of download speeds on any free VPN.

Should I use a “speed booster”?